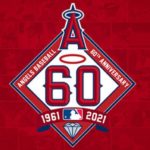 As part of the special podcast series commemorating “60 For 60” — 60 great Angels players going all the way back to 1961 in honor of the Angels’ 60th anniversary, No. 60-56 on the list of Halos players using BJ Martin’s “top secret” sabermetric formula (which someday, may be revealed?)

It’s a lot of podcast-listening coming up for you, Angels fans, so stay tuned here on your drive time or wherever you listen to your podcasts.

Here are the first 45 minutes coming right at you like a Don Aase fastball.

In this premier “60 For 60” episode, BJ Martin and Angels Nation managing editor Stu Matthews have joined forces to break down their special memories of five of the 60 Angels you might find memorable or may have never heard from.

Here are Numbers 60-56 on the list, so please stop whatever you’re doing and listen to BJ and Stu have a neighborly chit-chat about these Angels you’d better not forget in their 60th anniversay season:

BJ breaks down all five of these players in prose form at Prime Time Sports Talk, taking you from 60 to 56. But stay tuned for your drive time, because BJ and Stu reminisced through all 60 players of the list, they went deeper and even talked about the “snubs” who didn’t make the list — on several, several episodes to come.

That’s how much we like talking about the Angels Baseball Club.

Although the Los Angeles Angeles dropped their series opener to the Seattle Mariners,…