The 2023 MLB schedules were announced on Wednesday, and for the Los Angeles Angels, it amounts to a lot of change. Every team will now play 46 Interleague games, which is an increase from 20.

The 2023 MLB schedules are also bringing more balance for all 30 teams. The Angels will make only seven visits to opposing American League West cities and play a total of 52 divisional divisional games next season (down from 76).

Like with the 2022 season, the Angels have the Sunday (July 9) before the All-Star Game off. The Seattle Mariners are hosting the 2023 All-Star Game at T-Mobile Park on Tuesday, July 11.

The 2023 Angels schedule begins with an Opening Day matchup against the Oakland Athletics on March 30. L.A. will be on the road, which is in contrast to this season when they hosted the Houston Astros in the regular season opener.

This is the sixth time in seven seasons that the Angels open up their season against the Athletics.

Per usual, the Angels and Los Angeles Dodgers each will host the Freeway Series — June 20-21 in Anaheim, and July 7-8 at Dodger Stadium. The Angels went 0-4 against the Dodgers during the 2022 season.

With the Angels playing the National League East next season, they will visit the Philadelphia Phillies at Citizens Bank Park from Aug. 28-30, 2023. That’s notable as Mike Trout grew up in Millville, New Jersey, which is about an hour away from the ballpark.

The Angels last faced the Phillies on the road in 2014, and Trout was welcomed with multiple standing ovations throughout the series.

The 2023 Angels schedule finishes with a six-game homestand against the Texas Rangers and Athletics. Depending on where L.A. is in the standings, the stretch could be pivotal to team’s playoff chances. The final day of the 2023 MLB regular season is Sunday, Oct. 1. 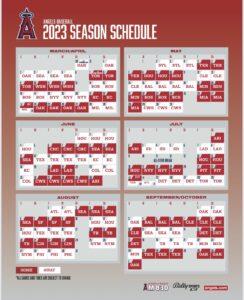 With a busy start to free agency for the Los Angeles Angels,…