The first Ohtani bobblehead released by FOCO — now sold out — was to celebrate his 2021 MVP award, one of the many honors he received for what is arguably the greatest individual season of all time.

This limited edition bobblehead is numbered out of 521 available and is priced at $60. Fans who are interested should expect a quick selling out of this item, as Ohtani merchandise remains in high demand months after the conclusion of the 2021 season. 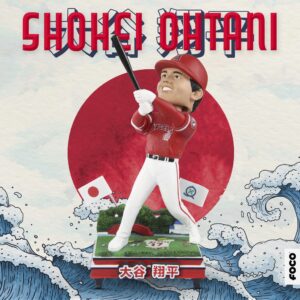 Ohtani breaking through to become a superstar player in 2021 was met with huge media coverage in the United States. However, his impact on MLB and the game of baseball can be further felt in Japan, making Ohtani perhaps the most popular player in the world at this moment.

The Angels superstar has no plans to slow down after concerns that his level of production as both a pitcher and hitter may be unsustainable. “At this point, I’m not really worried about anything going forward,” Ohtani said of his sustainability.

“I feel pretty confident that I could repeat what I did this year. I just need to get out there and play every day and leave the numbers, put up good numbers, and I think I’ll be able to at least have a similar season as this year.”

As part of a GQ profile on Ohtani, the two-way star went into detail on a number of topics concerning his growing baseball legend. One thing that stood out was his relationship with another Japanese-born MLB MVP, Ichiro Suzuki.

He discussed advice that Suzuki gave to him during his rookie year, Suzuki’s 18th in Major League Baseball. There, he learned that being an adaptable player that constantly tweaks his game is part of what makes him a unique talent.