Springtime in the Springs — Fred Lynn

Fred Lynn was standing on top of the baseball world by age 23 in 1975. But he never saw the peaks of towering Mount San Jacinto looming over the desert resort of Palm Springs until he joined the California Angels six years later.

The new Angels star quickly became nearly as big a figure in Palm Springs for four short springs as that Big Mountain.

Lynn was a SoCal sports legend who’d already made MLB his name in Boston, and when Fred Lynn returned and arrived in Palm Springs in 1981 as new centerfielder for the California Angels … Lynn wondered where all the baseball fields were.

There was just one full-sized baseball diamond, and that was the stadium field.

“The first thing I noticed when I got to Palm Springs was that we had one full field — the stadium field where we played our games.

“Adjacent to that was a little infield diamond, like a half field … But that was it,” Lynn said in our interview last week. “There was no fence on it, nothing even for a second field.

“But spring training there, in Palm Springs … there was nothing like it.”

But Palm Springs thrilled Lynn more than any spring facility he visited in 17 years as a major leaguer.

With their combined charm, Palm Springs, smiling Fred Lynn and Angels fans grew to love each other.

“Boy — were the games in Palm Springs special,” said Lynn, now 69 and retired along the San Diego coast with his wife Natalie. “The games were amazing, and Palm Springs was just so unique — it was small, and it was special/ There was no place like it.

“What we had for spring training in Palm Springs can never be matched again.”

As a young phenom out of USC with the Boston Red Sox, Lynn he had trained in the plush spring surroundings of Winter Haven, Florida.

Then in ’75, the smiling, lefty-swinging Lynn put together his incendiary 1975 season: He hit .331 and took home both the Rookie of the Year and the MVP awards (and took on Pete Rose and Johnny Bench in the Fall Classic).

A 39-homer, 122-RBI year in 1979 for Boston propelled him into the ranks of super stardom. Lynn was the key piece in a 1981 blockbuster trade in which the main pieces were Lynn for Angels’ veteran lefty Frank Tanana.

So, by the early 1980s, new Angel Fred Lynn was cruising in his Porsche 911 Targa down the Banning Pass from his El Monte, CA home and what he calls “Autry Country” — the Palm Springs site where he’d gather with the Cowboy, Gene Autry, and big-name teammates like Grich, DeCinces, Carew, Downing and Reggie Jackson.

“That team was amazing,” Lynn said. “It was a very experienced squad. I think I was the youngest starter, and I was only 30 years old. Every guy had won All-Stars, MVPs, or World Series rings

“It was a smart team, obviously veterans. Everybody knew their job, nobody had to tell anyone what to do on that club. It was a lot of fun to be on that club, so spring training came pretty natural.”

So for Lynn in Palm Springs, there was a mix of starlight, sunlight and baseball.

“In the old days, guys would use the six weeks of spring training to get in shape,” Lynn says. “Well, guys were gaining weight in Palm Springs.”

Lynn laughs to think about it.

. “Everybody came out to Palm Springs. There were lots of Hollywood-type people who would come, especially on the weekends.

It was night-and-day from what he’d experienced with the Red Sox, the ancient organization that had multi-field facilities for spring training for years in Winter Haven, Florida.

In Palm Springs, there was only the stadium field — a nice one, mind you — and that was about it. Except for everything else in the jewel of the California desert.

Palm Springs was small, really small. It wasn’t easy to get to, particularly for other MLB teams training in Arizona. But it was gorgeous, full of money, fat steaks in the restaurants and dollops of sunshine and chill.

“I don’t know that it prepared us very well for the beginning of the season, but we had a ball. And the weather was perfect.”

For four solid years of his helped lead the Angels to the 1982 AL Championship Series, in which he became the series MVP, despite being on the losing end to the Milwaukee Brewers.

But in Palm Springs, with the fans, Fred Lynn was always a winner. The fans could practically pick Fred Lynn’s pocket in the outfield on sunny weekends at the little ballpark.

“Come Saturday, when they had tons of people in Palm Springs, they’d open up the outfield for fans,” Lynn said. “And they had a little bit of a warning track and maybe about 10 or 12 feet where they roped it off. But the fans were actually on the field with us, right behind me in center field.”

Lynn remembered that when balls went past the outfielders and the rope into the mingling fans on the warning track, it was ruled a ground-rule double.

Spring training is meant to be a mix of hard work and fun, but, in Palm Springs … it was mostly fun.

“When it was a really nice day, and the ladies were out — in their bikinis or whatever you’d think they were wearing … well, that’s what they were wearing,” Lynn said “And they were drinking beers or coolers, drinking a-plenty, and everybody was having a big old party in the sun, and they were literally two feet behind me on the field.

“It was kind of distracting! But it was great fun for the outfielders, I’ll tell you that. I’d talk to the fans behind me in between pitches, talk about anything — whatever. It was as close as you could get.”

It’s 30 years since he retired from MLB, but Lynn marvels at Angels center fielder Mike Trout. He thinks back to his Palm Springs days, and tries to think again like a fan: “I want so badly for Mike Trout to be able to play on the big stage, like I had the chance to, in the World Series.”

So he remembers those conversations with spring-breaking fans in Palms Springs in the outfield behind the ropes.

The Mountain, the “Big Sky,” and Gene Autry’s influence dominated everything.

The cool evenings in jacuzzis at Mission Hills, where Lynn bought a condo as a young star, soothed the muscles.

But the tan, craggy peak of Mt San Jacinto, looming more than 10,000 feet into the sun to the west in the afternoons, looked like Mt Everest from down on the field in Palm Springs with towering blue skies above.

“One of the things I remember quite distinctly, as a center fielder, is that the backdrop was the mountain,” Lynn said. “That Mountain! … So home plate, as I was looking from center, I’m looking up for a baseball and there’s that brown mountain …

“So when balls were hit, they would go up into the air, and into that brown background, and you just couldn’t see it.

“I mean, you really had to focus out there … And then it would fly above the mountain and you would go ‘Oh, there it is!’ and then you’d run after it and try to catch it.”

That was MLB spring training baseball at Autry’s little stadium in the Coachella Valley. Lynn said: “If you could catch fly balls in Palm Springs, you could catch them anywhere, because it was really difficult to see.”

Angels Stadium in Palm Springs didn’t have lights, so the Halos played all day games all the years they trained there.

When they went on the road to Arizona, they stayed in hotels, but it was always a treat to come “home,” because that’s where the bright lights of the wealthy little city of Palm Springs came at night.

“Think about the nightlife in Palm Springs, you remember?” Lynn said. “For the guys on the visiting teams, Palm Springs was really special.”

So there was baseball in the day and play at night for many ballplayers. Lynn, who had a family, stayed at his condo near his MLB neighbors George Brett and Johnny Bench. Many of the Angels players stayed at Gene Autry’s hotel.

“That was nice,” Lynn said, “because you had a wonderful owner, and they had their own hotel — all the guys stayed there and ate all their meals there, so Mr Autry was benefiting everyone on every end. It was a great hotel. It really was.

“He was a Hollywood guy, so it was perfect! He did it right, coming out of Hollywood, and that was a playground for the stars back in the day.” 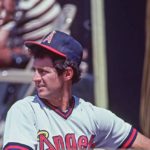 But then the logistics of being the only spring training team in California became too difficult for even the Hollywood-connected Autrys to overcome.

Even while playing day games, when the Angels would go on the road to Arizona, a high-priced roster like theirs wouldn’t hitch the bus back-and-forth across the desert for weeks.

“We’d go for a week at a time and stay in a hotel and play a bunch of teams, and then we’d come back,” Lynn said. “It wasn’t easy for other clubs to try to come and play us, either. They had to come into Palm Springs from Arizona, because there were no other teams close by.

“So Palm Springs was probably kind of a pain in the butt for them. … But, once they got to Palm Springs, well, you remember the nightlife … ”

Despite the glamor, the training facilities were obviously inadequate in Palm Springs.

Because of only one auxiliary infield diamond near the stadium field, Lynn said there were early mornings for extra training.

“If infielders needed work, and we the rest of the team was taking BP on the big field, they’d have to do their work on this little tiny diamond adjacent to the bigger field.”

So if infielders needed work and we were taking BP on the big field, they’d have to do their work on this little tiny diamond adjacent to the bigger field.

“In Palm Springs, when you only have one facility, training tended to drag on.”

Except for the games, which Lynn wishes could have lasted forever. Lynn used to invite his former coaches and teachers from El Monte High to games in Palm Springs for the weekend, who were happy even when Lynn hit a home run into right-center and spilled a tray of their beers.

“It was so relaxed, and different in Palm Springs, especially in the games.” Lynn said.

He recalled second baseman Bobby Grich, once of the anchormen of the 1982 playoff-bound team, using body signals to spell out “A-N-G-E-L-S” in an impromptu dance/chat in front of the Angels dugout behind the chain-link fence in Palm Springs.

He remembers signed lots of autographs, even during games. And despite Angels Nation staff writer’s BJ Martin’s theory that Lynn was a reluctant autograph signer, see above.

“Tempe is great, but some things just only happened in Palm Springs. As Lynn says with a touch of sadness: “It can never happen again. But Palm Springs was a hoot …”

Read the entire Angels Nation’s series about “Springtimes in the Springs”:

After a hot start to the season, the Los Angeles Angels quickly fell out of the playoff…